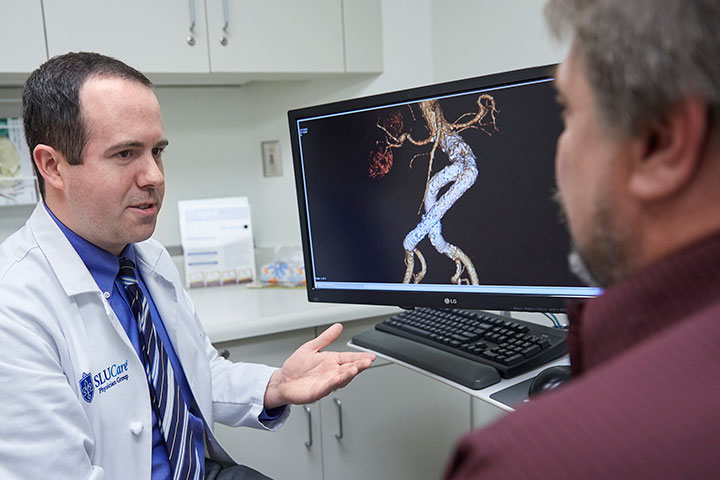 One evening last autumn, Ronald Grzywacz was not feeling well. He didn’t know what was causing the pain in his abdomen and back. It continued to get worse, but he went to bed hoping it would go away. It didn’t.

By early morning, he was pale, perspiring and shaking, with an increased heart rate and low blood pressure. He was seen at a hospital in Illinois, but his condition was so serious that he had to be transferred to SSM Health Saint Louis University Hospital.

SLUCare vascular surgeon Dr. Michael Williams met him there and prepared him for emergency surgery. Grzywacz had suffered a ruptured abdominal aortic aneurysm that measured a surprising 8 centimeters (3.15 inches) in diameter, Williams says. The damaged vessel was leaking blood into the abdomen, creating a life-threatening situation. “A normal aorta measures 2.5 to 3 centimeters,” Williams notes. “When an aneurysm enlarges the vessel to more than 5 centimeters, its chance of bursting increases dramatically. For Ron’s aorta to make it to 8 centimeters before rupturing was highly unusual.”

Williams and his team performed endovascular aneurysm repair surgery, a minimally invasive procedure using small groin incisions. A stent inserted through an artery is guided upward to the site of the aneurysm. “The stent seals the vessel from the inside and stops the bleeding,” Williams explains. The procedure offers advantages over traditional surgical repair techniques that involve a larger abdominal incision, more recovery time and a greater risk of pain or infection, he says.

Grzywacz was only 54 when his aneurysm burst, putting him well below the typical age range of patients with the condition, according to Williams. “It’s most common in Caucasian men over 65 who smoke,” he says. “Ron met three of those four criteria.” Genetic factors also can play a role, as not every smoker develops an aneurysm, he says. And it’s rare for the condition to show up in people who don’t smoke.

A ruptured aneurysm is an eye-opening experience for most people, but some still may be tempted to start smoking again. This is a good time for us to intervene and help them understand why they need to quit permanently.”

Grzywacz’s case may be unusual in some ways, but he is not alone. Like him, most patients are unaware they have the condition until the vessel ruptures, says Dr. Matt Smeds, a SLUCare vascular surgeon. If they are fortunate enough to have an abdominal scan for another reason, and it identifies an aneurysm before it bursts, surgery can be performed to prevent rupture.

“There is a 70 to 80 percent risk of death when this type of aneurysm bursts,” Smeds explains. “In most people who survive, it’s because the body has contained the bleeding to some extent. The aorta runs behind other organs and tissues, which may put pressure on the rupture point and slow the bleeding. We think that is what happened in Ron’s case.”

While Grzywacz recovered well from his life-saving surgery, he had some understandable fears about his long-term recovery. “I’m an equipment operator, so I worried about being able to do everything I needed to when I returned to work,” he says.

To help him regain his footing, the SLUCare team provided Grzywacz with important additional services. “We have occupational therapists and dietitians to help patients like Ron stay healthy,” Smeds says. “I am a certified tobacco treatment specialist, and we have a good program to help patients stop smoking. A ruptured aneurysm is an eye-opening experience for most people, but some still may be tempted to start smoking again. This is a good time for us to intervene and help them understand why they need to quit permanently.”

Grzywacz and his wife, Cindy, say the care he has received from SLUCare physicians and staff at Saint Louis University Hospital has been extremely thorough and compassionate. “Getting Dr. Williams as my husband’s surgeon was like winning the lottery,” Cindy says. “Ron was on the operating table within minutes of arriving at the emergency room. The attention we’ve received from the team has been awesome, and they have continued to answer all of our questions carefully. They never rush us through a follow-up appointment. If I ever need surgery myself, I won’t go anywhere else.”

Her husband adds, “The team truly cares that you understand everything that’s going on with your surgery. They make you feel that you really matter. The nurses are helpful and supportive, and they have continued to be that way in my follow-up visits. After coming home from surgery, I was back to my job in about six weeks, and I have had no difficulties at all.”

Williams has some important advice for those who may be at risk for this kind of aneurysm. “The best way to lower your chances of having one is to quit smoking or avoid starting,” he says. “We really want to get that message out to the public. If you have smoked more than 100 cigarettes in your life, you are at risk for the condition.”

Smeds says SLUCare is developing new, even faster protocols to transfer patients with urgent aortic problems from other hospitals. “The sooner we can get them into an operating room, the better their outcomes will be,” he says.