It was just a routine eye exam. But the peripheral vision loss her eye doctor detected —too little for Stephanie Rose even to notice — concerned him enough to refer Rose to the emergency room. The vision loss was misdiagnosed and treated as a pituitary cyst, and Rose didn't find out until seven years later that what she actually had was a pituitary adenoma, a benign tumor.

That's what brought her to the office of Dr. Jeroen Coppens, a SLUCare Physician Group neurosurgeon and assistant professor of neurosurgery at Saint Louis University. Coppens partnered with Dr. Jastin Antisdel, chief of SLUCare Physician Group's division of rhinology, sinus and anterior skull base surgery program, to perform a minimally invasive endoscopic procedure that involves entering the skull base through the nose.

The goal of the surgery is to remove the tumor so it doesn't grow back, and if the patient has had vision loss, we also make sure we take the tumor off the optic nerves so people can regain optimal vision.”

"SLUCare's skull base program covers a wide range of pathologies, but we mainly deal with pituitary tumors and other rare forms of anterior skull base tumors," Coppens says. "The goal of the surgery is to remove the tumor so it doesn't grow back, and if the patient has had vision loss, we also make sure we take the tumor off the optic nerves so people can regain optimal vision." 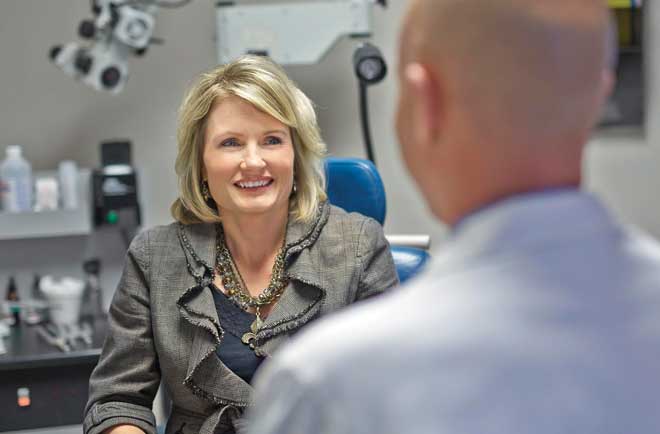 A successful skull base surgery requires a team approach. "I make sure we preserve as much of the nasal function as possible, and Dr. Coppens then removes the tumor," says Antisdel, who also is the director of the Saint Louis University Sinus Institute. "As far as having endoscopically trained neurosurgeons working in conjunction with trained rhinologists, SLUCare has more to offer than anyone else. We offer a high level of integrated care, and we do a lot of these surgeries."

Removing tumors endoscopically with a scope less than half a centimeter in diameter has major benefits for patients like Rose. "We used to have to split open the inside of the nose or go underneath the lip," Antisdel says. This could cause significant nasal issues, including numbness in the face and a loss of the sense of smell, he adds. "With the endoscopic approach, we can check out our blind spots, look behind the carotid artery and make sure we remove the entire tumor," Coppens says.

And a less invasive surgery means a shorter recuperation time. "Patients leave the hospital on average two to five days after surgery," Antisdel says. "The sense of smell returns to normal. With many of our patients, when they walk out of surgery you would never know by looking at them, because it's all done on the inside."

Rose, whose procedure was successful, continues to see Dr. Coppens once a year for follow-up MRIs. "He makes sure everything is good and stable," she says. "If the tumor comes back, he most likely will be able to use radiation to treat it. I probably will never need surgery again."