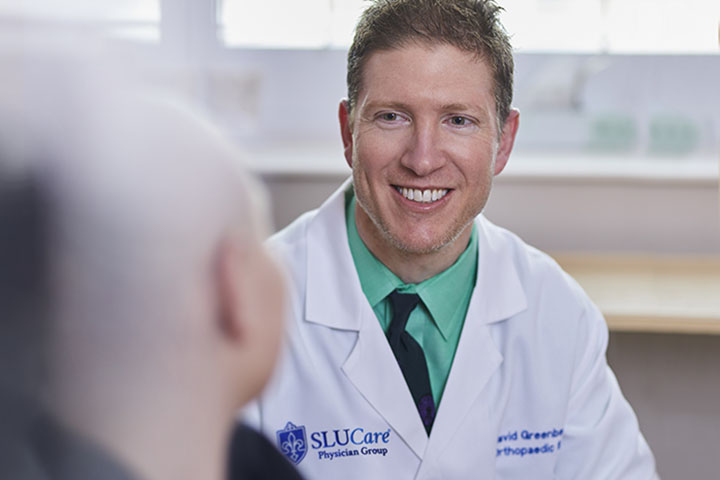 Last year, 14-year-old Quentin Tarpley of Marble Hill, Missouri, began feeling discomfort in his right knee. At first, he and his parents thought it might just be growing pains. But it wouldn’t go away, and it was causing him to limp, so the eighth-grader saw a local doctor. From there, he was referred to SLUCare orthopedic surgeon and oncologist Dr. David Greenberg at SSM Health Saint Louis University Hospital.

Imaging tests and a biopsy confirmed a very serious hidden problem. Quentin had an osteosarcoma, a malignant bone tumor, at the top of his right tibia—the larger of the two bones in the lower leg. The growth was just below his knee, which explained the pain he’d been having. The tumor extended from the interior of the bone into surrounding tissue, and initially it looked like amputation might be necessary, Greenberg says. “Fortunately, we were able to remove the diseased section of bone and replace it with a metal implant so the leg could be saved,” he notes. “Major blood vessels were nearby, so the surgery was a complex process that took 13 hours.” But Quentin was in experienced hands — SLUCare’s sarcoma center is one of only two in the region, and it offers a full complement of care.

When you get a diagnosis like osteosarcoma, it’s a life-changing event. But we are highly experienced at treating bone cancers, and the majority of patients like Quentin go on to have full lives.”

Quentin says he could tell that Greenberg was pulling for him every step of the way, both before and after the surgery. “He showed me and my family pictures of the tumor and explained the operation,” he says. “He was really sympathetic and made sure I was comfortable with everything. It felt good knowing that he really cared. He said I was an inspiration to him because I handled things so well.”

According to Quentin, the situation seemed a bit overwhelming at times, but he was glad to have the moral support of the SLUCare team. “I knew the doctors and nurses wanted to help me get better,” he says. He currently is undergoing chemotherapy and physical therapy and has returned to school. Best of all, he is walking normally and says he is looking forward to picking up his sousaphone and easing back into marching band. “I’m getting there,” he notes. “Because of everything I’ve been through, I am interested in going to medical school to become an anesthesiologist.”

Greenberg says this case was a challenging one, and it’s a good illustration of the considerable expertise that SLUCare professionals bring to the table. They are fully equipped to treat complex bone cancers and often receive referrals from other physicians and medical centers. Some cancers can metastasize to other areas of the body, and it’s important to work with a team that can perform thorough testing and cover all the bases. “Osteosarcoma can spread to areas like the lungs and other bones,” Greenberg explains. “Ultimately, we want to remove the cancer, reconstruct the bone, preserve the limb and save the patient’s life.”

Greenberg says teams of health professionals from SSM Health Saint Louis University and Cardinal Glennon Children’s hospitals work together to understand disease processes and provide innovative care for patients of all ages. “We have sarcoma conferences every other week that include oncologists, surgeons, pathologists, radiologists and others,” he explains. “When you get a diagnosis like osteosarcoma, it’s a life-changing event. But we are highly experienced at treating bone cancers, and the majority of patients like Quentin go on to have full lives. Our compassionate, multidisciplinary approach is why people from all over come to us for care.”